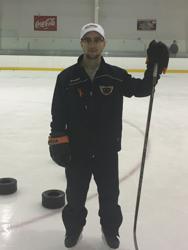 Coach Cuvo just completed an incredible season. His Pee Wee A National team finished the regular DVHL season 26-0, earning a trip directly to District playoffs. Cuvo successfully lead his team to the District Championship game, where his team defeated the Hunterdon Bears to Bring the AAHA District Champion banner back to the Steel Ice Center.

To borrow a quote from one of the Parents on his team, “The last eight months have been a life lesson for the boys on the importance of practice, preparation, discipline, and hard work. The boys have learned something that many don’t learn in a decade, and will stay with them forever…and they did it without ever realizing they were getting a lesson at all.”

A little more about Coach Cuvo-

Vinny Cuvo started his playing career locally with the Lehigh Valley Thunder. Next came the Blast and the Flames until he left after his first year of 18U to play junior hockey in New Jersey. While playing, Vinny helped out multiple mite/squirt teams in our organization in his spare time. Vinny is a level 4 USA Hockey coach and spent last season as an assistant coach with the Wilkes-Barre/Scranton Jr. Knights Tier 1 Pee wee team while finishing his Junior career.