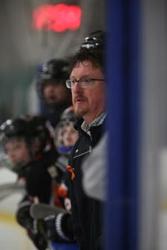 Phantoms Youth Hockey Ops would like to announce T.K Long as the top U12 head coach for the 2017-2018 season.

Long has been actively coaching youth hockey in the Lehigh Valley since 2008.

Over the past three years he has chosen to diversify his coaching role as an assistant on 3 different teams (9 teams in 3 seasons). He averaged bench time of 125 games per season and an equal amount of practices at the U10, U12, U14, and U16 levels. This rare experience has gifted him the unique ability to recognize and maximize player and team development while ensuring a successful transition to the next level.  He has been part of several DVHL playoff and district bound teams, as well as a Silver Stick Regional Championship team which participated in the prestigious Silver Stick Championships in Toronto at the U16 level in 2017.

Long played hockey for the Lehigh Valley Comets from U8 (Mite) through U14 (Bantam) and continued playing at The Hill School, in Pottstown Pennsylvania through his senior year.  He also played highly competitive golf up and down the east coast, which included a trip to the Pennsylvania State Amateur at the age of 17.